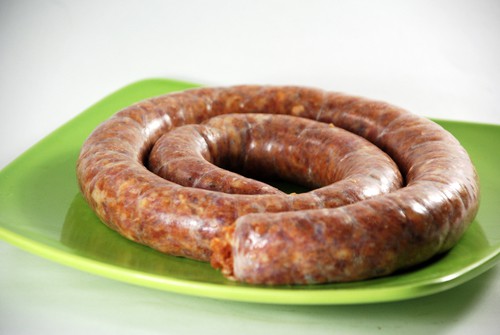 Mexican Chorizo at a Glance

There are a wide variety of influences that have shaped Mexican cuisine due to the early colonizers in the land as well as trading. As a result, Mexican food has a diverse flavor and style that can be owed to various cultures.

During pre-Columbian times the early Mexicans were exposed to the use of different herbs and chili through trade. These were quickly incorporated as ingredients in many of the dishes they cooked. Another strong influence is that of the Spanish, it is from them that the practice of making sausages known as chorizo was taken.

However, despite the similarity in name, chorizos made by the Mexicans are quite different from the Spanish chorizo. For one, Mexican chorizo is commonly made from firm pork such as the shoulder and does not contain offal. Also its red color comes not just from paprika but from the chilies used as well.

Mexican chorizo is made with ground meat that is seasoned with salt, vinegar, garlic, chili powder, oregano, cumin, cinnamon, crushed chilies and other spices. The seasoned meat may be stuffed into casings or cooked as bulk or loose sausages. Being a fresh sausage, Mexican chorizo must be thoroughly cooked before being eaten. It is an important part of Mexican cooking and is served for breakfast lunch and dinner.

One of the most popular ways Mexican chorizo is used is as an addition to scrambled eggs or cheese dips. It's also incorporated with other ground meats for tacos, burritos, chili, burgers and pizza toppings. Mexican chorizo goes well with refried beans, potatoes, tortillas and even rice. Aside from the traditional recipes, it can also be used in more creative ways such as an addition to pasta sauce, in soups, as stuffing for vegetables or even sliced thinly and eaten with bread as a sandwich.

Like What You've Read?
If so, please join the more than 19,000 people who receive my exclusive newsletter and get a FREE COPY of my printable modernist ingredient cheatsheet.
Just click on the green button below!


Get Started!
Did you enjoy this?
I'd really appreciate you sharing it with your friends:

Thanks for signing up! I look forward to sending you recipes, links, and exclusive content and offers that you can't find anywhere else on the site, and I'll send you a free copy of my modernist ingredient cheatsheet too!

You're On Your Way to Sous Vide Success!

Thanks for signing up! I look forward to guiding you through the process of discovering sous vide with amazing articles, recipes, and tips and tricks you can use to impress your friends and family by turning out amazing food time and time again!

Want to Level Up Your Sous Vide Game?

My FREE email course will help you make perfect meats, master searing, and discover the sous vide times and temperatures you need to make everyday food amazing...and impress your friends and family.