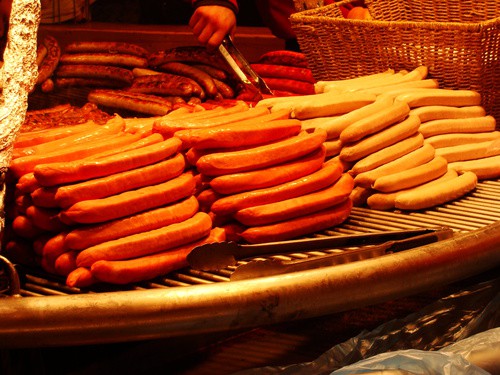 Frankfurters at a Glance

The first frankfurters made in Frankfurt, Germany during the 13th Century were pork sausages served during imperial coronations, such as that of Maximilian II. These were known as Frankfurter Würstchen and gained much popularity.

Between the 18th and 19th Century, Franconian butcher Johann Georg Lahner started making the sausage with pure beef in Vienna and simply called these Frankfurters. It was then brought to the United States by German immigrants and was sold in buns known as hot dogs during the late 1800's.

To date, frankfurters or hot dogs as they are popularly known remain to be a favored sausage by many. Quite possibly, the creation of these sausages originally catered to using up all of parts of a butchered pig. Many franks are still made with meat trimmings, although some varieties now come made with pure meat such as beef.

There are also those which come made with poultry such as chicken or turkey which others find healthier. Despite the many different types, these are still made in a similar manner. The meat, trimmings, cereal filler and seasonings are all mixed together then processed to form an emulsified mixture. These are then put into natural casings or synthetic casings and cooked or smoked.

The end product is a highly seasoned sausage with a meaty yet mild taste. These are often flavorful without carrying any spiciness in it. Frankfurters are commonly made in long, thin cylindrical sausages with a tan color and fine texture. Although these come pre-cooked it is often cooked further to eliminate listeria.

Franks can be boiled, steamed, roasted and even pan fried with some oil. These also compliment a variety of foods. Like other sausages it pairs well with pickled vegetables.

Perhaps the most popular way this is served is on a bun as a hot dog sandwich. Many different sauces and condiments can be put on it including mustard, ketchup, mayonnaise, cheese, pickle relish, onions, tomatoes, hot sauce and chili among other things. Condiments and toppings used may vary from one place to another.

Photo Credit: Ben Sutherland
Like What You've Read?
If so, please join the more than 19,000 people who receive my exclusive newsletter and get a FREE COPY of my printable modernist ingredient cheatsheet.
Just click on the green button below!


Get Started!
Did you enjoy this?
I'd really appreciate you sharing it with your friends:

Thanks for signing up! I look forward to sending you recipes, links, and exclusive content and offers that you can't find anywhere else on the site, and I'll send you a free copy of my modernist ingredient cheatsheet too!

You're On Your Way to Sous Vide Success!

Thanks for signing up! I look forward to guiding you through the process of discovering sous vide with amazing articles, recipes, and tips and tricks you can use to impress your friends and family by turning out amazing food time and time again!

Want to Level Up Your Sous Vide Game?

My FREE email course will help you make perfect meats, master searing, and discover the sous vide times and temperatures you need to make everyday food amazing...and impress your friends and family.